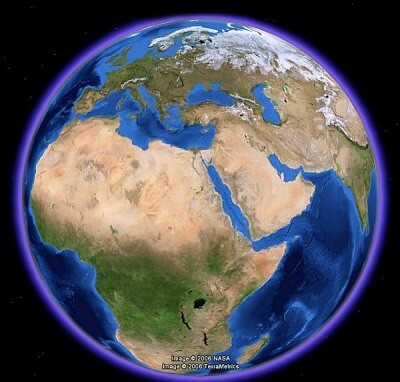 The Bible is a book about the earth.  All the prophecies of the future and all the promises to men of faith concern the earth.  Heaven is revealed as the place where God dwells and is not now, or ever, to be a place for men to live.  The earth has been made for this purpose as we read in the Psalms:

“The heaven, even the heavens are the Lord’s: but the earth hath he given to the children of men” Psalm 115:16

The earth created for a purpose

This tiny planet is important because God has a purpose with it.  The Bible tells us about this purpose. This book is concerned with just seven thousand years of the earth’s history beginning with the events related in the early chapters of Genesis, leading finally to the glorious picture of the earth revealed in the Old Testament prophets and in the Book of Revelation.  We are told very little about what happened before this period opened and not very much about what will follow it.

However, of one thing there can be no mistake: the earth did not come into existence by some accident. It was created for a purpose; and that purpose was conceived by its Creator, the God of the Bible, at the very beginning. This purpose is stated very simply:

“For thus saith the Lord that created the heavens; God himself that formed the earth and made it; he hath established it, he created it not in vain, he  formed it to be inhabited: I am the Lord and there is none else” Isaiah 45:18

God, then, did not create the earth “in vain” or “to lie waste”, as the original Hebrew word means.  He intended it to be eternally inhabited by men and women who honour Him as the Creator and giver of all things, and who thus give Him pleasure.

"Thou art worthy, O Lord, to receive glory and hhonour and power: for thou hast created all things, and for thy pleasure they are and were created." Revelation 4:11

This creative purpose is seen as a primary characteristic of the God of the Bible.  Whereas He Himself is the great uncreate, being “from everlasting to everlasting”, all creation is attributed to Him.  He has conceived it and He has achieved it.  We can become part of His great purpose, if we give heed to the commandments He has revealed in the Bible.

Order out of chaos

The act of creation is seen as the bringing of order out of chaos.  The universe about us is superbly ordered and well behaved. The p1anets move in relation to each other according to fixed laws - laws that have been fixed by a Designer and Creator. Consequently, men are able to predict their individual positions at any point in time with great accuracy.  The atoms of the substances around us react with each other in an entirely consistent way.  So from the cosmic to the sub-atomic there is order and consistency with God’s fixed laws in perfect harmony.  Why, then, should we attribute such wonderful regularity to a blind and unintelligent principle we blandly call “nature”?  It requires much more ‘faith’ to attribute the earth’s existence to blind chance than to acknowledge that there is a Great Gesigner behind it all. There can be no doubt that the Designer is the all-powerful God revealed to us in the Bible.

Looking at the first few verses of the Bible we learn that,

“the earth was without form and void; and darkness was upon the face of the deep” Genesis 1:2

So, before the acts of creation described in the rest of this chapter, the earth was “without form”, or as the Hebrew means, it “lay waste”.  It was disordered and chaotic and it required to be ordered and organised before it could fulfil the divine purpose.  We recall from Isaiah 45 that the purpose behind creation was that the earth should not be always “waste”, but should be inhabited.

The six days of creation

In the course of six days this chaotic state of affairs was completely transformed by the Spirit, or power, of God.  At the conclusion of this period the earth experienced regular exposure to light and darkness, with areas of dry land filled with rich vegetation and the seas stocked with all forms of marine life.  Animals roamed the dry land, the skies were filled with birds, whilst man, the most remarkable of all God’s creative work, coexisted with all these creatures.  All this work was pronounced by God to be “very good”.  The seventh day was spent in contemplation and enjoyment of the results of the six days of creative activity and God was “refreshed”  by what he saw.

"[The sabbath] is a sign between me and the children of Israel for ever: for in six days the LORD made heaven and earth, and on the seventh day he rested, and was refreshed." Exodus 31:17

This simple account has been subjected to many attacks by the “wise of this world”.  We should remember, however, that Jesus believed it and made reference to it during his work of preaching the gospel, as Matthew records.

"And he answered and said unto them, Have ye not read, that he which made them at the beginning made them male and female, And said, For this cause shall a man leave father and mother, and shall cleave to his wife: and they twain shall be one flesh?" Matthew 19:4-5

He also directed our attention to the importance of the Genesis record:

“If they hear not Moses (who wrote the Book of Genesis) and the prophets, neither will they be persuaded, though one rose from the dead” Luke 16:31

“If ye believe not Moses’ writings, how shall ye believe my words?” John 5.47

It is therefore futile to profess belief in the New Testament whilst ignoring, or rejecting, the Old Testament.

It has been claimed that the six days were really six thousand years, but there is no suggestion of this in the record.  Such an idea would make Adam more than a thousand years old even before he sinned, yet he died younger than this!  Surely, if God possesses the power attributed to Him in the Genesis record of creation, then He must be powerful enough to perform this work in the period of six days as the account says.

God, the author of the Bible, is without doubt the Creator of the earth as we know it today.  He does have an important purpose with it.  He does intend to populate it with men and women who in the future will be freed from the curses of this present mortal existence. They will be favoured to enjoy the blessings of the seventh millennium of the earth's history, as related in God’s word. To find out how you can be part of this great purpose you must read the Bible with an open mind, and be prepared to accept its teaching as a message from the Creator of heaven and earth.